I am still grieving the passing of my father. He went home to be with the Lord in July 2019, five days before our wedding anniversary and six months to the day of us moving in to take care of him. I am still hurt and I miss him dearly. Read about how I deal with the grief here.

Yesterday, as I was scanning news sites in an attempt to stay up to date with the happenings of the world, I came across this article on CNN. The article is basically a compilation of reactions from citizens who watched the riots on January 6th and responded to CNN when asked how they felt.

I know it doesn’t seem like one topic has anything to do with the other, but hang in there with me til the end.

So, I was at work when the riots happened. I was perusing the news sites trying to keep up with the madness of the day when I saw that the president (at that time) was going to have a rally of some sort. Because I needed something to fill the void during lunch and I decided to tune in.

The music was catchy and my coworker and I found ourselves singing along while we waited to hear whatever announcements were going to be made. Finally, when the suburbans with tint as dark as night and flashing lights pulled onto the grounds, we had to leave for a meeting.

Once the meeting ended, I went back to my desk to find I’d left the page up that once showed the rally. If my memory serves and this timeline is correct, we were at the 1:10 P.M. mark.

I was in shock. My brain couldn’t process what was happening. I haven’t been able to put it into words until now.

In the midst of the events and the days following, I thought what was bothering me was the clear difference in police response, but that wasn’t it. I kind of expected it. It’s par for the course. There was something else that broke inside me. It broke for the one that came before me and the sacrifices he made. It broke because he loved this country and he felt he’d achieved the American Dream. Before my eyes, the dream became a nightmare.

After my Dad died, my husband and I were going through his things and found the beginnings of an essay he was writing for his adult education class.

Here is the rough draft in his own writing: 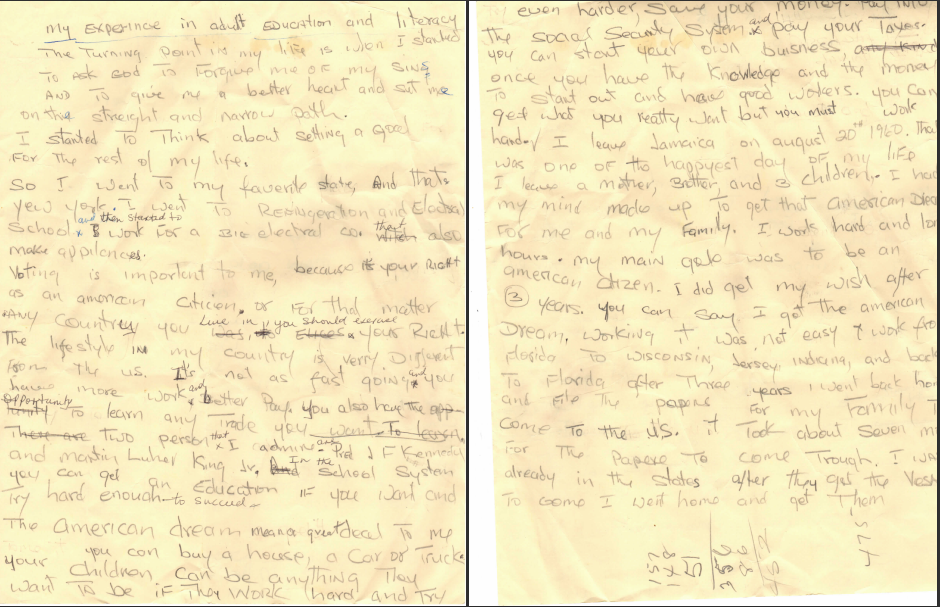 Here is what it says:

My experience in adult education literacy

The turning point in my life is when I started to ask God to forgive me of my sins and to give me a better heart and set me on the straight and narrow path.

So I went to my favorite state and that’s New York. I went to the Refrigeration and Electrical School. I work for a big electrical company that also makes appliances.

Voting is important to me because it’s your right as an American citizen or for that matter any country you live in, you should exercise your right.

The lifestyle in my country is very different from the US. It’s not as fast going and you have more work and better pay. You also have the opportunity to learn any trade you want.

Two person that I admire are President J F Kennedy and Martin Luther King Jr. In the school system, you can get an education if you want and try hard enough to succeed.

The American Dream means a great deal to me. You can buy a house, a car, or truck. Your children can be anything they want to be if they work hard and try even harder, save your money. Pay into Social Security System and pay your taxes. You can start your own business. Once you have the knowledge and the money to start out and have good workers. You can get what you really want, but you must work hard.

I leave Jamaica on August 20, 1960. That was one of the happiest days of my life. I leave a mother, brother, and 3 children. I had my mind made up to get that American Dream for me and my family.I work hard and long hours. My main goal was to be an American citizen. I did get my wish after 3 years. You can say I got the American Dream. Working it was not easy. I work from Florida to Wisconsin, Jersey, Indiana, and back to Florida. After three years I went back home to file the papers for my family to come to the U.S. It took about seven months for the papers to come through. I was already in the states after they got the visa to come. I went home and get them.

Daddy landed on US soil in August 1960. He worked as a farmhand in several states until he settled in New York. He was able to bring my three older sisters and my uncle here so they could have better lives. Eventually, he moved to Florida, married my mom, and they had me.

Daddy had no high school diploma, but he had a dream. He believed in working hard and I saw evidence of it every day of my life until he left. He was always willing to learn a new skill. His curiosity could never be quenched. He always used to tell, “there is never a reason to be bored, there is too much to learn.”

When the confirmation process was disrupted on January 6th, I was glad my father wasn’t here to see it. I don’t think I would have been able to watch him watch his dream country fall the way it did.

For me, it was like losing him all over again. I read that essay days after he passed away and it had become a part of me. It helped me answer questions about myself I didn’t know I had. I wanted to have that passion for America too. I wanted to see her through his eyes besides the hostile climate and aggressive rhetoric aimed at people who had no choice concerning the color of their skin.

But alas it was not meant to be; at least not right now.